Being a participant in Taekwondo, mean being apart of a team! At Han Lee’s Taekwondo Academy, you will receive the best training from our team members, who are dedicated to your success

Mr Doug started studying Taekwondo in 2007 with his daughters at Han Lee Taekwondo in Castle Rock, CO as part of the after school enrichment program. He started assisting in classes shortly before earning his black belt alongside his daughter (one of the proudest moments in his life) in 2010. He officially became an instructor in 2011.

Mr Doug believes there is a big difference between those who are martial artists and those who do martial arts. He strives to be the former and expects the same from his students. One of Mr Doug’s joys in life is seeing his students succeed and earn their black belt. He is passionate about all forms of martial art and loves the dual challenge of mind and body that comes from its practice.

When not doing Taekwondo, Mr Doug works as a software development manager for a “big four” tech company, skis in the winter, hikes in the summer, and listens to and attempts to play live music. Most importantly, his greatest joy in life is spending quality time with his amazing girlfriend, daughters, and their families. 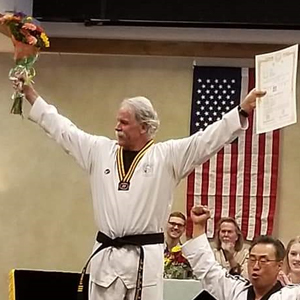 Mr. Alberts is presently the COO and President of Unique Bavarian Brewery a start up German engineered brewery and distillation technology Company. The two before that Mr. Alberts has been the COO of a high-tech data analytics company call Baker Street Scientific, Inc. The four years prior to the COO role Mr. Alberts as VP president at American Energy Assets where he manages a portfolio over 100 nationwide healthcare facilities and systems managing their energy consumption efficiency through a company developed software program. The software program provides data importing exporting, data analytics, savings analysis, capital and operational budgeting and project management tools specific to energy management savings.

Mr. Alberts was a Partner at Endeavor Capital Management over four years where he was responsible for funding and acting as COO for several software companies as the operating partner. Mr. Alberts has been a CEO and Senior Executive with experience in both Fortune 500 and start-up firms. Mr. Alberts also spent the three years as principal in a retail development firm building neighborhood retail centers as well as a Principal in a commercial real estate brokerage firm.

From 2002 to 2005, Mr. Alberts was a consultant to growing businesses where he assisted in raising capital, building strategic business plans, and developing sales and marketing plans. Mr. Alberts was the President & CEO of Emergent IT Central from 2000 to 2001.

Mr. Alberts held a series of senior positions at Convergent Communications from 1997 to 2001. As Senior Vice President, Mr. Alberts participated in securing high-yield debt financing of $160MM and in the Company’s IPO. Where they built a company from ground zero to $230M in revenue in just 3 years. He developed and supported a sales team of 140, increased sales by $60 million, and implemented a customer portfolio management program to over 30,000 customers. Mr. Alberts also served as Senior Vice President of Enterprise Network Services (ENS) for Convergent, which provided communications outsourcing services including voice, data, video, and E-business infrastructure. While directing the ENS team, he generated $1 million per month in sales revenue with contract value of over $50 million, built a sales team of 68 sales professionals, and an operations team of 85 technical, financial, project management, and marketing professionals.

Prior to this, Mr. Alberts spent 17 years in various senior operational and sales management positions with ServiceMaster, including Regional Director of Sales in both Energy Management and Food Service Management generating sales of over $12M each year, and Division Operations Manager in Industrial Management Services where he had PL responsibility of $22M of annual budget. In 1994, Mr. Alberts founded and was President of Marcon Enterprises, a commercial and residential construction business, which he grew to $2 million in two years with fifty employees. He received a B.A. from the University of Phoenix. 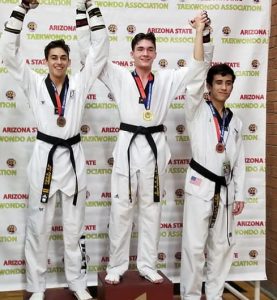 Mr.Trent started Taekwondo when he was eight years old with his father, Mr.Wood, after witnessing a school demonstration. Since receiving their black belts in 2013, he has been competing in sparring at the national and international levels, and is ranked 4th in the nation. As one of the head instructors at our Castle Rock location, he tries his best to make every class a learning opportunity and a workout for both children and adults. He welcomes any questions or concerns you may have about your curriculum and the history/heritage of the school and Taekwondo itself. 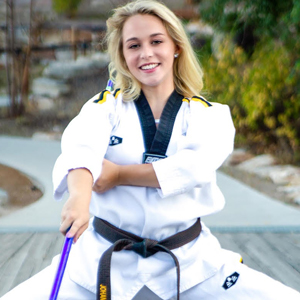 Johanna Aldrich, is a senior at Douglas County High School. She started Taekwondo when she was 6 years old. As a student, her biggest goal was not only to get her black belt, but also to become an Instructor. When she was 13, she tested for her 2nd degree black belt, She was also old enough to become a Junior Instructor. The first time she tested for Junior Instructor, she failed. According to her, “Failing was one of the hardest things I could’ve experienced, especially failing at something I wanted more than anything. Six months later I passed the test. I was very proud of what I had accomplished.”

In 2018, she became an employee as a Junior Instructor. Excited to start a new chapter in journey as an instructor, she knew that she would have to learn even more there everyday. In 2019 she tested to become a Certified Instructor. She passed the test, and received amazing feedback from her peers and fellow Instructors. At Han Lee’s Taekwondo Academy one of the programs they have is the Little Dragons program. It’s for kids ages 3-5. During her sophomore year of high school she started learning how to teach Little Dragons and soon became the new Little Dragons Instructor. This was a whole new experience for her especially since the kids were so little. She learned new things everyday and new ways to teach respect and discipline without being too hard on the kids. She loves teaching my Little Dragons. They are her biggest pride and joy and never fail to put a smile on her face. She states that, “I love teaching at Han Lee’s Taekwondo Academy, and I love all of my students. I’m always amazed at how much they accomplish and I am very proud of all of them.” 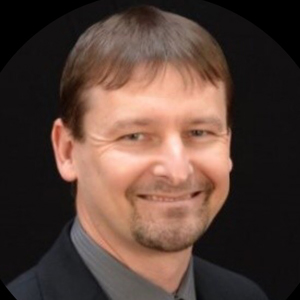 Kolby Breitenstein participates in Taekwondo with his wife, Erica, and two daughters, Vanissa and Meghan, who are all also black belts.

When not at Taekwondo, Kolby works as a Supplier Quality Manager in the Aerospace and Defense industry, and has been in the Quality Assurance field for over 20 years.The mindset of that specific technical and critical thinking carries over to all aspects in his life, including Taekwondo where the same skills are engrained in his teaching style. From his classes ,you can expect detail and by-the-book behavioral philosophies as mandated by Han Lee’s Taekwondo. When not working or training, he can be found with his family out enjoying the Colorado mountains.

Kolby is a 2nd degree black belt and teaches in the Castle Rock, CO location (as of Nov/20, will be one year from a certified 3rd degree). Kolby was the top ranking student in his graduating class.

Raquel Schirmann is of Spanish heritage and was brought up in Germany. She came to the USA in 1991 as a foreign language correspondent /interpreter. She is a Second Degree Blackbelt at Han Lee’s Taekwondo Academy and also is a Certified Instructor. Taekwondo has been a part of her life for the past 7+ years. What she enjoys most about Han Lee’s Academy are the people, the structure and the key life principles taught and encouraged among the community. As she states, “Grand Master Han Lee has built a wonderful academy that fits all persons of all ages and the collective motivation to be better, feel better and to do better, can be felt at all times. I appreciate the personal growth taught to me as an individual and to my family. It is an honor to be part of this school and I look forward to many more years of teaching and meeting future students to help them succeed in their Taekwondo journey.”

When she is not in Taekwondo or at work, you will mostly find her spending time with her family, animals and plants or traveling. She is most curious about the different world cultures and their history. 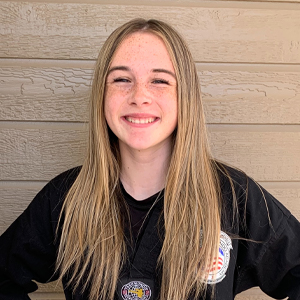 Bella started taekwondo at Han Lee’s Taekwondo Academy at the age of 10 and has earned her first degree black belt. Bella’s favorite thing to do at taekwondo is weapons, especially nunchucks. She is thankful for the confidence she has found through her classes at HLTA and enjoys the leadership opportunities afforded to her as a Jr. Kyosa candidate. Bella is a high school freshman and also plays on a competitive club volleyball team. 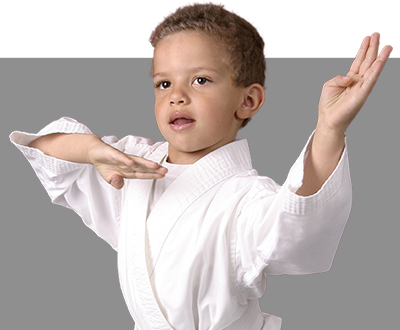 Or Visit: We are conveniently located at
729 Barranca Dr
Castle Rock, CO 80104,
so you, your friends, colleagues, and entire family can train in a
convenient, safe, clean, professional, welcoming environment.